I started this book hoping to get the basics of linguistics for one of my projects. I am very glad I went on with this book and not Chomsky’s Syntactic Structures (Read few pages and couldn’t understand anything). This book was like a quick crash course on linguistics. While most of Steven Pinker, professor of psychology at Harvard, work is build on Noam Chomsky’s Universal Grammar, he differs from Chomsky’s theory on various instances 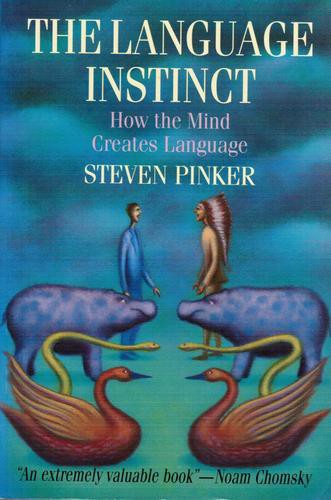 Pinker talks about everything from the difference between vowels and consonants, the grammar in black vernacular English and Pidgins, Computer Linguistics, Morphology and Phonology. Why children of migrated parents don’t get their parent’s accent? Why there is not a significant difference in language abilities in the different part of the world while the culture changes drastically? etc.. In short, he says humans are born with language skill, and it’s not something that we acquire after we are born (Nature vs. Nurture). Apparently, this is just one school of thought in linguistics (Refer Linguistic Wars).

Steven Pinker along with Neil deGrasse Tyson and few other are notable scientists who want to take science to the common man. It is a very appreciable and noble work especially in the times when half of the North America doesn’t believe in global warming. The problem though is the language and scientific vocabulary they use. It is understandable that the language should not be brought down so much that it loses its essence. But a bit more effort to communicate some basic stuff would have made it more enjoyable and at the same time informative for me. As it stands, the book is very informative but not easily enjoyable. But it should be mentioned that the author has put visible efforts in making it more understandable like have a glossary for all the linguistic terms. Maybe what Steven Levitt did with Freakonomics series by joining hands with a writer or as simple as having more (at least some) subtitles in 50-page chapter putting everything in context might help.

On the whole, the book is condensed. The first half of the book is easily readable compared to the other half. Maybe the information that I was looking for were in the there. Despite all my rantings on the writing (or my inability to understand the text), I would recommend it to anybody interested in linguistics or just curious about how language works.